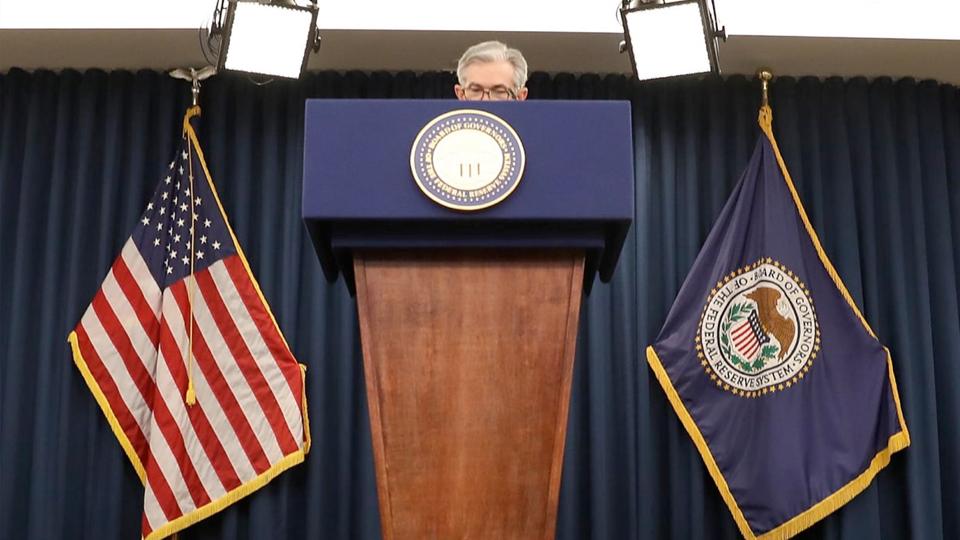 The debate on whether equity prices had reached a bottom was settled when the US May CPI print surprised to the upside and sent bond yields spiking higher and equity markets hurtling lower.

The peak inflation narrative, which had expected the rate of price rises to start falling early in the second quarter, is being increasingly questioned. All over the world inflation readings are well above target and staying stubbornly high (with China the only major exception), and each regions’ ability to absorb inflationary pressure varies significantly. The drivers of inflation are broadening and while goods inflation may be easing slightly, non-core inflation is rising, and services inflation is climbing in a tight labour market. Economic growth is moderating, but an inflection in inflation has not yet followed.

Higher inflation prints indicate the potential for more hawkish central bank policy. For the Fed, that could mean a steeper path of rate hikes including a 75bps move(s). As a result, each incremental data point will be watched closely and could sway how monetary policy is expected to evolve.

Whether the economy can withstand the sharp tightening path that markets expect is up for debate. As the Fed presses on the brakes harder, financial conditions become tighter and the chances of recession grow.

Stocks have de-rated meaningfully, largely reflecting the theme of aggressive policy normalisation by the Fed - the S&P 500 is trading at around 16x forward earnings, which is slightly below its 10-year average. There are also several contrarian technical indicators that suggest support for equities, such as the very cautious positioning in US stocks, elevated put-call ratio, and poor sentiment readings. With the large de-rating behind us, the debate must now shift to the earnings cycle.

With hot inflation abound, the peak inflation argument is delayed for now and the Fed is likely to remain on a hawkish path until monthly inflation shows clear signs of sequential slowing. This will create volatility in equity markets through the summer and an environment more suited to stock pickers who can unravel the intricate effects of inflation and slowing growth on financial statements.

The Equities Outlook provides an overview of our investment team’s views and positioning in each of the key markets. Each of our portfolio managers has discretion over the positioning and holdings of their portfolios, and, as a result, there may at times be differences between strategies applied within a fund and the views shared in this document.

Sentiment bearish in another inflationary and hawkish month

May was full of mixed signals but was ultimately another month of inflationary concerns and hawkish commentary. Equities were generally flat while commodities took another leg up with Brent crude climbing 15%. Global bonds, credit and emerging market bonds all gained.

Sentiment remains depressed as investors reduce risk appetite amid the ongoing conflict in Ukraine, Chinese lockdowns and some consumer-driven warnings.

Despite the VIX falling around 15% and the late-month equity rebound, the tone remains bearish and cautious. The growing band of investors who believe that we are at peak inflation were disheartened by a fresh batch of CPI prints that surprised to the upside.

Volatility dips in May but remains historically high 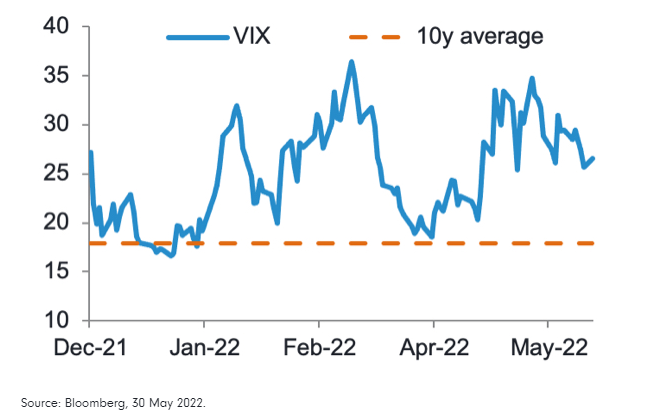 As we enter June, seasonally the worst month of the year in Europe for the past 20 years, it seems difficult to be upbeat. However, contrarians point to the easing Covid situation in China, hopes for peace in Ukraine, and the inevitable peaking of inflation. Bearish investors would likely highlight expected earnings downgrades and quantitative tightening, which has just begun in the US.

With the sharp rebound at the end of May, we could lack a catalyst for further upward momentum although investors are generally under-allocated to equities.

Rotations beneath the surface

Both the S&P 500 and Russell 2000 moved less than 0.01% on the previous month, while the Nasdaq fell 1.65%.  However, the underlying performance was more dramatic. The first half sell-off on sticky inflation readings, growth fears, and potential fragility in the consumer outlook brought the market to year-to-date lows only to be reversed by month-end buying in an oversold, highly bearish, lightly positioned, and thin liquidity market. As of the end of May, the S&P 500 is down 13.3%, Nasdaq -22.5%, and the Russell index -17%.

Divergence was fairly stark with a 15-20 ppt spread between best and worst performing sectors in the US and EU; energy led again while real estate and consumer were weaker. Small caps outperformed in the US but lagged in Europe. The value factor driven by energy and bank stocks outperformed strongly in both regions.

India and Singapore were the largest decliners in Asia, falling 3.7% and 3.0% respectively. India was hurt by heavy foreign selling and a surprise rate increase, with the central bank hiking by 40 bps after keeping rates unchanged at the April meeting when it raised the forecast for inflation and lowered the outlook for growth. In Singapore, institutional selling rose with particular evident in REITS.

China fared better with the CSI 300 up 1.9%, and Chinese midcaps performing particularly strongly. The Hang Seng climbed 1.5%. China is seeing a shift in sentiment on hopes of relaxing Covid restrictions in key cities such as Shanghai and Beijing.

The government is also attempting to stimulate growth and there’s talk that certain US tariffs could be removed on US goods. Both Southbound and Northbound connect investors were net buyers with Northbound flow turning net positive on the year.

Diverse performance across Asia in May 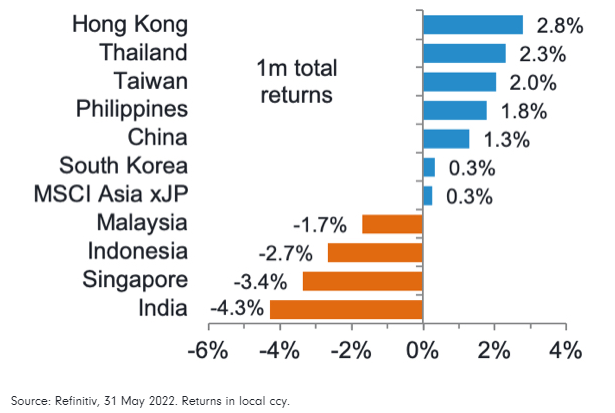 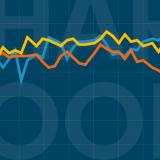 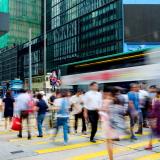 Fidelity - Time to be selective 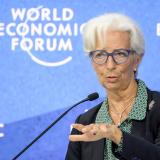 Fidelity - ECB: Too much too soon could be a riskier strategy